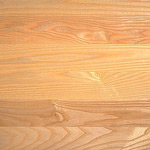 Other Names and Species:
White Ash
American ash
Biltmore ash
Canadian ash
Fresno
It contains 45-65 species of usually medium to large trees, mostly deciduous though a few subtropical species are evergreen.
White ash is not to be confused with mountain ash (eucalyptus regnans), which is native to Victoria and Tasmania. Mountain ash is the tallest hardwood species in the world, and is only exceeded in height by the redwoods of California. The sapwood of mountain ash has a pale pink-brown colour that is somewhat darker than the white ash.

The tree's common English name, ash, goes back to the Old English æsc, while the generic name originated in Latin. Both words also meant "spear" in their respective languages.
The sapwood of white ash is creamy white, while the heartwood ranges from light tan to dark brown. The grain is bold and straight, with an occasional wavy pattern; and in plain-sawn boards it can have a strong contrast. The wood has a lustrous appearance, and the texture is rather coarse.
White ash is elastic and hard, and it has excellent shock-resistance. The wood remains smooth under friction.
The hardness of white ash is 1320. White ash is thirty-two per cent harder than teak, about two per cent harder than red oak, two per cent softer than white oak, eight per cent softer than hard maple, roughly seventy-two per cent as hard as hickory or pecan, and sixty per cent as hard as santos mahogany's ranking of 2200.
White ash has good machining qualities, and it sands satisfactorily. When nailed, it has good holding ability, and it resists splitting. The wood responds well to staining and preservative treatment.
Because ash wood is so hard, strong, and flexible, it is among the most valuable hardwood species. It is used for fine flooring, furniture, tool handles, and sports equipment.