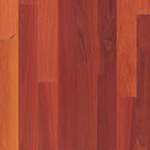 The sapwood of Cumaru is pale brown while the heartwood is purplish-red in colour. The species has an interlocked grain and possesses a medium grade texture.
Cabreuva is durable and resists attacks by fungus and insects. The wood remains smooth under friction and is reported to have no odour. It can take some time to dry properly but does have good stability characteristics once dry.
Cabreuvs’s hardness is 2200. As a flooring option, cabreuva is one of the most hard and durable woods. Often referred to as santos mahogany, this species is over sixty per cent harder than white oak, about seventy per cent harder than red oak, and is over twice the hardness of teak. Brazilian cherry is one of the few flooring species harder than cabreuva, with a rating of 2350. The wood can be somewhat difficult to cut due to its hardness. This species sands easily and takes a good finish.
Cabreuva's uses include flooring, furniture, and veneers.