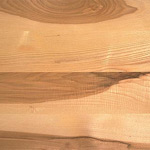 Origin:
Hickory is a type of tree, comprising the genus Carya (Ancient Greek: κάρυον, káryon, meaning "nut"). The genus includes 17 to 19 species. Five or six species are native to China, Indochina, and India (State of Assam), as many as 12 are native to the United States, four are found in Mexico, and two to four are from Canada.