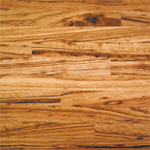 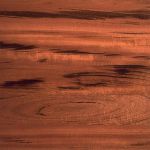 Goncalo Alves is commonly referred to as “Tigerwood” or “Brazilian Tigerwood” among flooring dealers. The wood has superb stiffness, strength, hardness, and durability. However, density and other mechanical properties can vary widely depending on the growing site and source region. The name “Jobillo” is sometimes used to refer to higher grades of Goncalo Alves among woodturners.

The sapwood of Tigerwood is brownish-white to dirty grey, while the heartwood is reddish-brown to light golden-brown in colour. The species has a mottled, wavy or interlocked, irregular grain. Tigerwood has a medium to dull lustre and is fine in texture. Tigerwood is a highly durable wood with a high resistance to beetle attack. The wood remains dimensionally stable and is reported to have no odour. Tigerwood is time consuming to dry properly while preventing degrade.
Tigerwood’s hardness is 1850. As a flooring option, this species is one of the harder and more durable woods. It falls between hickory or pecan and purpleheart in hardness, is nearly ninety-six per cent as hard as merbau, is a little over twenty-seven per cent harder than hard maple, and is about eighty-four per cent as hard as santos mahogany's ranking of 2200. Depending on the growing origin of Tigerwood, hawever it hardness could reach up to 2160.

Timber of tigerwood is reported to air-dry well with some minor warping or checking (which can occur in extreme conditions) and it generally resists shrinkage and movement after drying. Tigerwood is dimensionally stable and resists twisting and warping in the end product and will stand up well to wear. Tigerwood has a wide range of colouring and striping. The striping can vary from fine lines to bold strokes and the colour can have a large degree of colour change from a light orange and tan to a deep reddish brown. It also has a highly lustrous surface that is considered almost oily in appearance.

Goncalo Alves is commonly used to produce flooring products and is considered very durable, and it resists denting and traffic wear very well. What is interesting about tigerwood is that it is often graded differently than other species when used for flooring applications because of the dramatic colouring, which is what makes tigerwood so desirable. As an example, lesser grades such as #1 Common refer to small milling defects or lack of streaks in the end product. Clear grade tigerwood flooring is colour-sorted for a rich pink colour with pronounced brown and black streaks.

Tigerwood is considered only moderately difficult to work with, especially with hand tools. It is difficult to saw properly and requires carbide-tipped blades. Pre-boring is suggested yet the wood holds nails well once applied. Glue holds well, but pre-setting is suggested with tigerwood flooring. This species sands fairly easily but care should be taken as it can scratch somewhat easily in the process.

Sanding can also present more of a challenge with this hard exotic wood, and for large applications like floors, professional preparation is recommended. Tigerwood can be sealed for longer durability but weathers well naturally as well; no preservatives are needed. Depending on the amount of sunlight the wood will receive, the colour will often gradually darken over time, accentuating its distinctive grain pattern and giving it a slightly more subtle striping and increased luster.