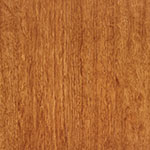 Afzelia species are used primarily for wood, though some species also have medicinal uses. The timber is most commonly traded under the collective name "doussie", as well as under name "afzelia". One of the common names is also "pod mahogany", adding to the confusion surrounding the name mahogany.
The sapwood of doussie is pale yellow to white, while the heartwood ranges from light brown to reddish-brown. The grain is straight and slightly interlocked. The wood has a medium luster, and the texture is somewhat coarse.
The doussie is very hard and durable, and it has excellent resistance to attack by termites. The wood remains smooth under friction. It shows only small movement with time.
Doussie's hardness is 1810. As a flooring option, it's hardness is over twice that of southern yellow pine, noticably harder than hard maple, almost identical to hickory or pecan, and about three quarters as hard as santos mahogany.
Doussie has good machining qualities, and it sands to a smooth surface. When nailed, it has good holding ability. The wood has satisfactory staining and polishing ability due to yellow deposits in pores.
Because afzelia wood is so hard and strong, it is among the most valuable exotic hardwood species. It uses include fine flooring, furniture, decking, stair rails, and construction.