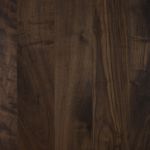 Origin:
Walnut is an Old World tree species native to the region stretching from the Balkans eastward to the Himalayas and southwest China. The largest forests are in Kyrgyzstan, where trees occur in extensive, nearly pure walnut forests at 1,000–2,000 m altitude (Hemery 1998)—notably at Arslanbob in Jalal-Abad Province. The Eastern Black walnut is native to eastern North America. It grows mostly in riparian zones, from southern Ontario, west to southeast South Dakota, south to Georgia, northern Florida and southwest to central Texas. Isolated wild trees in the Upper Ottawa Valley may be an isolated native population or may have derived from planted trees.

There is a distinct difference in colour between the nearly white sapwood of walnut and the heartwood, which ranges in colour from a deep, rich dark, almost chocolate brown to a purplish black. The wood often has a purplish cast with dark streaks. However, there is a wide variation of colour, figure, and grade within the species. The grain of walnut is mostly straight and open, though some boards may have a grain pattern that is burled or curly. In fact, the wood is especially valued for its wavy, curly, and mottled figures. The wood surface is generally fairly dull, though it may develop a lustrous patina after many years in use.
Although walnut is somewhat softer than the red oak, the wood is heavy, hard, and stiff and has excellent dimensional stability. It is moderately dense, but very strong, with good shock resistance. Walnut is one of the most durable of the domestic commercial woods, even under conditions favourable to decay.
Walnut’s hardness is 1010. Black walnut is nearly seventy-eight per cent as hard as red oak, is roughly thirty softer than sugar maple, about twenty-one per cent harder than African mahogany, and about forty-two per cent harder than Douglas fir.
The machining qualities of walnut are excellent, but it is also easily worked with hand tools. This wood has a distinctive sweet aroma when worked. It is fairly resistant to splitting and has good holding ability. It sands and finishes beautifully and holds both paint and stain exceptionally well.
Frequently used as a highlight material for borders and other inlay techniques, this familiar domestic wood has many commercial applications. It is typically found in wood flooring, veneer, panelling, fixtures, furniture, cabinets, and novelty items. In addition, it is superior to all other woods for gunstocks because of the way it keeps its shape.