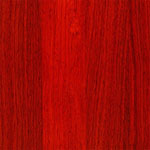 Most often Padauk is found in Africa, this why, it is commonly known as African Padauk. Freshly cut, it is a very bright red/orange but when exposed to sunlight fades over time to a warm brown. Its colour makes it a favourite among woodworkers. Padauk is are valued for their toughness, stability in use, and decorativeness, most having a reddish wood. Most Pterocarpus woods contain either water- or alcohol-soluble substances and can be used as dyes.
Although the sapwood of padauk tends to be a very uniform cream or pale beige color, the heartwood is prized for its rich reddish orange tone which over time seasons nicely to a dark reddish- or purple-brown color, or even black. Padauk has a moderately coarse texture, with large pores and a grain that can be straight or interlocked.
Harder and more stable than northern red oak, padauk is heavy and strong and has an average to high durability. It has excellent weathering qualities and is highly resistant to decay.
Padauk's hardness is 1725. As a flooring option, padauk is one of the harder wood species. It is over one third harder than red oak, is just over eighteen percent harder than hard maple, about five percent harder than wenge, and approaches seventy-eight percent of santos mahogany's ranking of 2200.
Padauk saws well, but because of its hardness and density it requires a slow saw rate. For best results, carbide tools are recommended. Although it machines easily, there may be some tearing of the interlocked grain. It sands satisfactorily and has good holding ability. Padauk can be finished to an eyecatching sheen without the need for staining. The wood has a tendency to bleed when finished with stains, but it has been found that water-based finishes may hold color better than other types when applied to padauk.
This exceptionally vivid and striking wood species is most often used for decorative purposes, as in wood flooring and veneers, inlay, fine joinery, fancy turnery, tool and knife handles, and carvings. 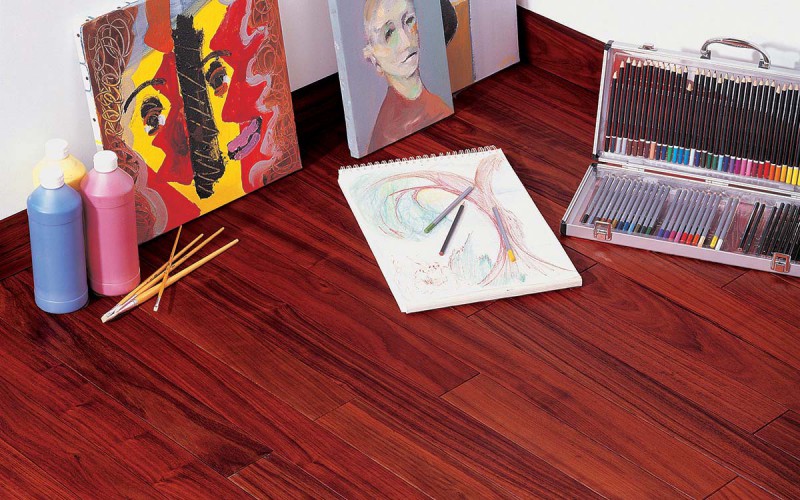