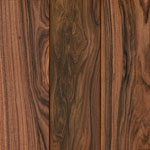 Morado is a wood of many names and it is sometimes called Pau Ferro. Because the wood is so similar in appearance and working properties to rosewood, it is also often referred to as Bolivian or Santos Rosewood. The wood has been used in various capacities as a substitute for the endangered Brazilian Rosewood. Despite the fact that the wood is not technically in the Dalbergia genus, it’s in a closely-related genus (Machaerium), and contains the same sensitizing compounds found in rosewoods.

Morado or Bolivian rosewood is distinctive for its dark brown to violet color with black streaks or striping. Over time, the wood may lighten considerably from darker brown tones to lighter golden tan colors. In addition, the broad color variation exhibited in freshly cut wood can undergo substantial muting over time. It has a uniform and moderately coarse texture.
Bolivian rosewood is notably hard and dense, with a dimensional stability similar to that of red oak.
Hardness - 1960. Bolivian rosewood is nearly six percent as harder than pecan or hickory, is roughly thirty five percent harder than hard maple, about eight percent harder than red pine, almost about fifty two percent harder than red oak, and is roughly eighty nine percent as hard as santos mahogany's ranking of 2200.
Despite its density, Bolivian rosewood works well and sands to a fine natural polish. Many oil-based finishes will not dry properly with this wood, so water-based stains are preferred.
Bolivian rosewood is generally useful for the same purposes as the Brazilian variety, including wood flooring, decorative veneers, fine furniture, cabinet work, and specialty items.