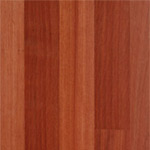 Origin:
Species of Swietenia native to southern Florida, USA, The Bahamas, Cuba, Jamaica, and Hispaniola. In addition to Swietenia mahoganies this applies also to Khaya (African Mahogany native to tropical Africa and Madagascar.) and Toona (Chinese Mahogany native from Afghanistan south to India, and east to North Korea, Papua New Guinea and eastern Australia.) which are both from the Meliacae (Mahogany) family.

The very fine and even texture of this well-known and popular hardwood, along with its striped figuring, complements the attractive dark reddish brown colour of mahogany wood flooring. The white sapwood is sharply demarcated from the heartwood. The grain of mahogany is typically interlocked, and the surface can have a medium to high lustre. When freshly cut, it has a pleasant spicy scent.
Mahogany is known for its strength and beauty, and it has outstanding durability. Given its hardness and colour-fastness, santos mahogany is a superior choice to genuine Honduran mahogany (Swietenia macrophylla), which it closely resembles in colour. In fact, although genuine mahogany is traditionally chosen for fine furniture and millwork, it is seldom used in wood flooring because it lacks sufficient hardness to withstand constant foot traffic.
Because of its wide variety of species, mahogany has also very wide range of hardness – from the Red Mohogany(Australia) 2697 and Santos Mahogany (Central and South America) 2200 to African Mahogany (Africa) 830 and Honduran Mahogany (Central America) 900.
Because of the hardness of some os the speceis, the wood can make sawing and machining difficult, carbide tooling is recommended for mahogany wood flooring. It sands beautifully to a high natural polish, however, and has good holding ability.
Mahogany is typically found in wood flooring, turnery, interior trim, and furniture. The pleasantly aromatic balsam of mahogany is often used as an ingredient in some perfumes.

Honduran Mahogany goes by many names, yet perhaps its most accurate and telling name is Genuine Mahogany. Not to be confused with cheaper imitations, such as Philippine Mahogany, Swietenia macrophylla is what most consider to be the real and true species when referring to “Mahogany.”
An incredibly important commercial timber in Latin America, Honduran Mahogany is now grown extensively on plantations. It has been widely exploited, leading to its inclusion on the CITES Appendix II in 2003. In effect, this limits the international exporting of the lumber to certified sustainable sources. (This is also why many lumber retailers located in the United States are unable to ship Honduran Mahogany outside of the country.) Substitutes sometimes used are African Mahogany or Sapele.
Honduran Mahogany’s easy workability, combined with its beauty and phenomenal stability have made this lumber an enduring favorite.