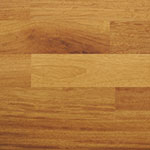 Milicia excelsa (commonly known as African teak, Mvule or Iroko) is a tree species from tropical Africa. It is one of two tree species yielding timber known as Iroko.
Heartwood of Iroko is usually a yellow to golden or medium brown, with color tending to darken over time. Pale yellow sapwood is clearly demarcated from the heartwood. It has a medium to coarse texture, with open pores and an interlocked grain. Iroko is very durable, and is resistant to both rot and insect attack; it’s sometimes used as a substitute for Teak.
Iroko's hardness is 1260, which makes it somewhat durable choice for flooring with similar properties to Red Oak. It is thirty percent softer than Purpleheart and about twenty five percent harder than Black American Walnut
Iroko has no characteristic odor. Generally easy to work, with the exception of its interlocked grain, which may cause some tearout during surfacing operations. Also, deposits of calcium carbonate are sometimes present, which can have a significant dulling effect on cutters. Iroko glues and finishes well. Given the high prices of genuine Teak, Iroko could be considered a low-cost alternative. The wood is stable, durable, and has an overall look that somewhat resembles Teak. Iroko is commonly used for veneer, flooring, furniture, cabinetry, boatbuilding, turned items, and other small specialty wood items.