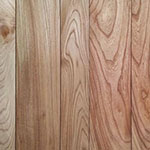 Scientific Name:
Ulmus procera (sometimes treated as a synonym of U. minor)

The heartwood of European Elm is light to medium reddish brown. Paler sapwood is usually well defined. It has interlocked grain (making it very resistant to splitting). Elm has a coarse, wooly texture, with the grain ranging from straight to slightly interlocked. The luster of this wood is comparable to ash.
Hardness rating of Elm is 830, which makes it a softer wood flooring choice. It is neaerly identical in hardness to leopardwood or lacewood, about fifty-four percent harder than chestnut, roughly forty-nine percent as hard as merbau, about fifty-seven percent as hard as hard maple, close to fifty-one percent that of wenge, and just under thirty-eight percent as hard as santos mahogany’s ranking of 2200.
Elm usually has a strong, unpleasant smell when green; though once dried has very little odor. Can be a challenge to work because of interlocked grain, especially on quartersawn surfaces. Planing can cause tearout and/or fuzzy surfaces. Poor dimensional stability. Glues, stains, and finishes well. Responds well to steam bending, and holds nails and screws well. Besides being used in wood flooring, elm can be found used for interior trim, wainscotting, decorative veneers, and moldings.