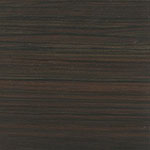 Ebony is a dense black hardwood, most commonly yielded by several different species in the genus Diospyros, which also contains the persimmons. Ebony is dense enough to sink in water. It is finely-textured and has a very smooth finish when polished, making it valuable as an ornamental wood. The word ebony comes from the Ancient Egyptian hbny, through the Ancient Greek ἔβενος (ébenos), into Latin and Middle English.

When freshly cut, the sapwood of Ebony is pink-coloured, but darkens to a pale red brown; whereas the heartwood shows a uniform jet-black or black-brown colour, sometimes with streaks. Ebony has a very fine texture, with the grain ranging from straight to slightly interlocked, or even moderately curly. The lustre of this wood may have an almost metallic appearance.
An attractive and popular wood with many decorative uses, ebony is notably hard, heavy, and strong, and also very resistant to termite attack.
Ebony’s hardness is 3220. It is an incredibly hard and durable wood flooring choice. It is over two thirds harder than merbau, is roughly one hundred and twenty-two per cent harder than hard maple, over ninety-seven per cent harder than wenge, and just over forty-six per cent harder than santos mahogany's ranking of 2200.
This highly durable wood is difficult to work with either machine or hand tools, due to its relative hardness; and, as any contractor or builder can tell you, it has a pronounced dulling effect on tool edges. It usually requires pre-drilling to nail or screw. However, it finishes to a naturally dark and polished surface. Note that prolonged exposure to ebony sawdust may cause dermatitis.
Besides being used in hardwood flooring and inlaid work, ebony can be found in piano keys and other musical instruments, cutlery and tool handles, decorative carvings, and turnery.

Ebony timber is likely to be extremely expensive, along with most other Ebony members in the Diospyros genus. The tree grows slowly, has a very limited natural habitat, and is highly desired for the wood’s aesthetic appeal and toughness.
Ebony is not listed in the CITES Appendices, but is on the IUCN Red List. It is listed as vulnerable due to a population reduction of over 20% in the past three generations, caused by a decline in its natural range, and exploitation.