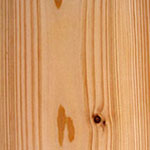 The common name - Douglas-fir, honors David Douglas, a Scottish botanist and collector who first reported the extraordinary nature and potential of the species. The common name is misleading since it is not a true fir, i.e., not a member of the genus Abies. For this reason the name is often written as Douglas-fir (a name also used for the genus Pseudotsuga as a whole.
Depending on the age and growing location of the tree, the color of Douglas fir can vary, but is usually light brown, with hints of yellow or red, as well as darker growth rings. The wood is moderately lustrous, showing a generally straight grain with occasional wavy or curly figuring. The texture ranges from medium to coarse.
Douglas fir is reported to be moderately resistant to decay, though it is somewhat susceptible to insect attack. When worked, it gives off a sweet, piney odor from the resin or pitch that the wood contains.
The hardness of Douglas fir is 660 and it falling near the bottom of the Janka scale, it is one of the softest and least durable woods. It isninety-six percent softer than southern yellow pine (loblolly and shortleaf), it is only one-third as hard as santos mahogany’s ranking of 2200.
Generally Douglas-fir machines well, with a small to moderate blunting effect on cutting tools. It stains, glues, and finishes well.
Douglas-fir’s uses include wood flooring, plywood manufacturing, veneer, and lumber for structural and construction purposes.