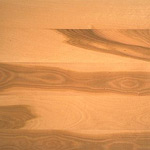 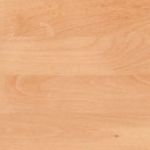 Names and Species:American beech
European beech (fagus sylvatica) is widely used in furniture-making, as its light orangey-tan colour, as well as its fine graining and small rays, offer a distinct contemporary look.

While the sapwood is generally pale white, the heartwood of the American beech is mostly reddish brown. There is often a moderate to high colour variation between boards. The grain of the wood is straight, and mostly closed, with a fine, uniform texture. Beech wood surfaces may sometimes have a silvery sheen.
Beech is frequently used in factory floors and other high-traffic areas, since it wears well and stays smooth when subjected to repeated friction. The wood is hard and elastic, with excellent shock-resistance.
It’s hardness is 1300. The beech is thirty per cent harder than teak, almost identical to red oak in hardness (under one per cent), four per cent softer than white oak, ten per cent softer than hard maple, thirty-two per cent softer than jarrah, and just over fifty-nine per cent as hard as santos mahogany's ranking of 2200.
Although beech wood is difficult to work with hand tools, it does have good machining qualities. It sands satisfactorily, and holds nails well; however, it does have a tendency to split.
Beech was once neglected as a resource because of the tendency of the wood to crack during air drying. Kiln drying is much more successful with this species, and so it has become more valuable. The wood is commonly used for domestic and commercial flooring, furniture, decorative veneers, and musical instruments.